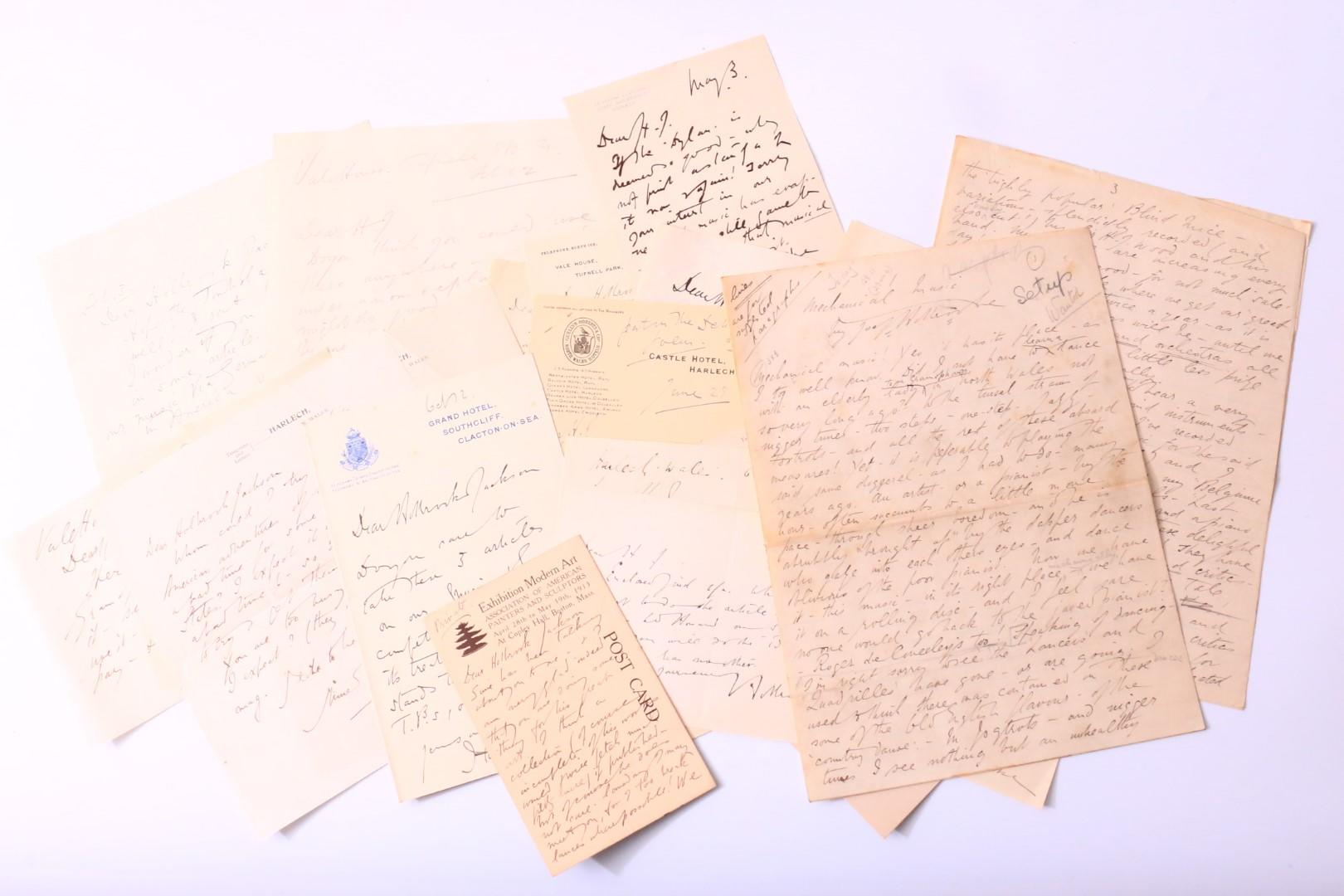 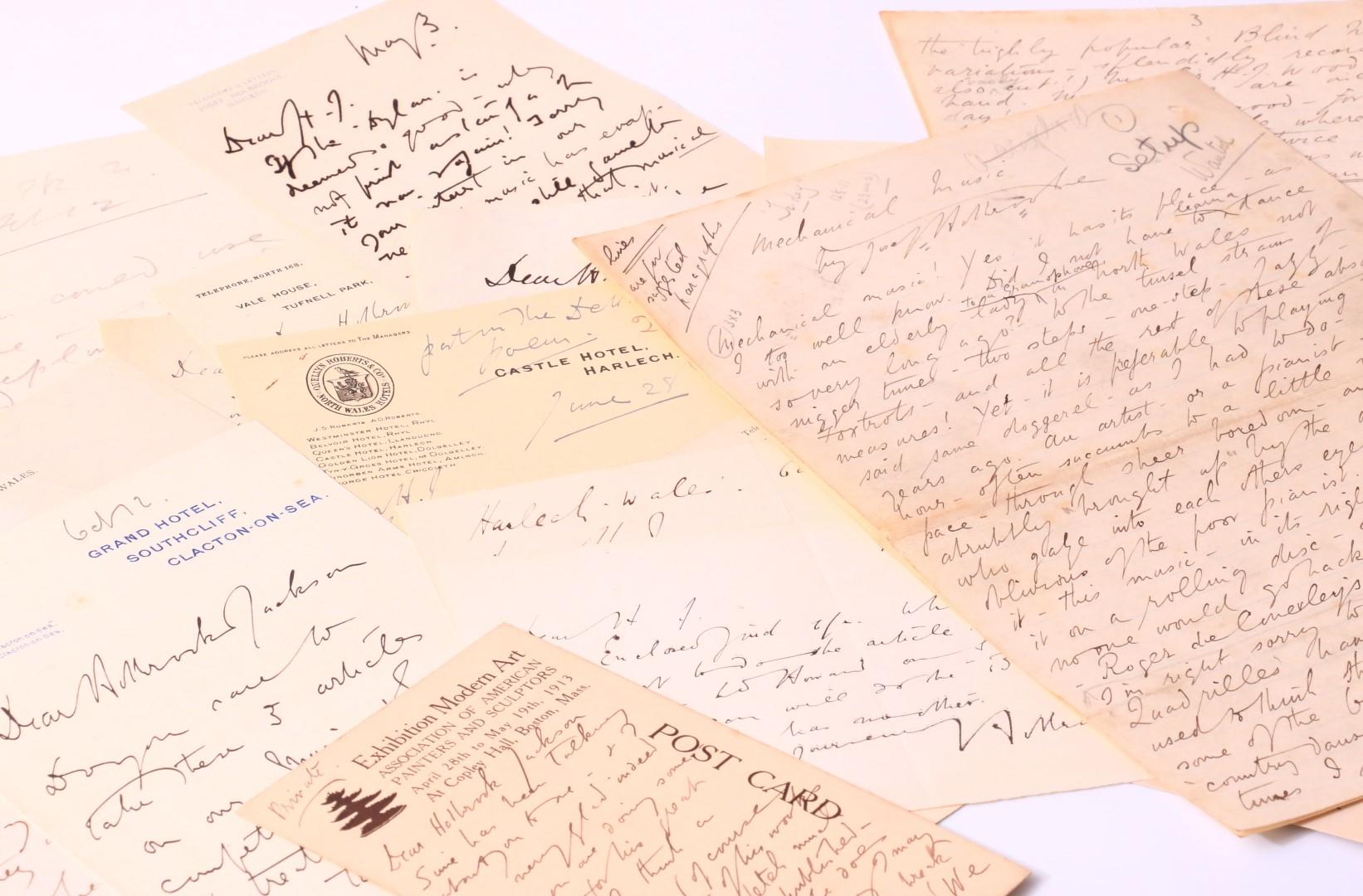 Josef Holbrooke - A Collection of Letters and a Manuscript.

A collection of letters comprising 14 ALS, 3 ALC and 1 APC to writer and general literato Holbrook Jackson and a 4pp Autograph ms. Josef Holbrooke (also spelt Joseph) was an English composer perhaps best known for his pieces based on the works of Edgar Allen Poe. Described thus (quoted from a previous seller's catalogue description). "A series of matter-of-fact letters written in a somewhat staccato style, reporting on recent musical events, touching on creative undertakings of Holbrooke and his peers, and sending corrections for proofs of an article on the Gramophone" The letters also include his work on Sidney Sime's Bogey Beasts and there's a mention of his adaptation of Poe's Red Death. The holograph manuscript is a four page essay titled Mechanical Music by Josef Holbrooke, with some editor's marks and begins ?Mechanical music! Yes it has its place - as I too well know. Did I not have to learn a dance with an elderly lady to a gramophone in North Wales not so very long ago?" Some select text from the letters: "[10 Oct. n.y.] Why not let Gerald Cumberland give you an article on our modern music? No one could do it better -- & there is not enough about music in today for me. G. Newman is no good at it. Rather a shame you don't give ... Walden a bit of space now & then!.... I've never got thru to G.K.C. for those 'Flying Nun' lyrics. Did you try for me? [3 June n.y.] Have you seen the new Sime book? His show is on this week - 1st of his life to the public! Hope you may be able to go -- & also help the Beast Book with your pen..."; "[31 Aug. n.y.] I'm working at portentous things - rewarded after death. -- I want to get some of my small operetta -- & music sketches on the halls.... I've got a weird Ballet drama on Poe's 'Red Death'... the 'Empire' would make a sensation with it. ...?; [14 Sept. n.y.] Whom could I try for these American adventures of mine? Is it a bad time for some satire on the States? I expect it is always a bad time -- so I feel keen to try & get them in a vol. ... they are printed in a mag.?; ?[27 month illegible, n.y.] As the 'Drama' is coming off soon with Beechum -- you may like to use one of the enclosed in an article. The Nash's people won't alter ... so I've asked for this material back. If you can do a magazine ... I think the 'Strand' would take it. ... Simes' scenes are in it -- & I have 4 caricatures also by him...."; and ?[n.d.] I hear you have not sent the small cheque for the ... poem to Lord Harvard? .... I should not fail to do this. We never know if we may find such people useful & they think a lot of such a reward .... I may send you a musical article soon. Meanwhile should a book (Kegan Paul) arrive for Review -- for goodness sake give it a good one -- or attack it out of recognition!? [9975, Hyraxia Books].